You are here: Home / 3 Ed One / Fear and precarity

Most fear is banal, everyday and relentless. Some days I fear the cops and the fascists. But most days I just fear not being able to pay my rent, not having a job next year. The dreary fear that comes with only having just enough money to get by is the kind that the majority of people have always had to live with. In the last few decades, however, the precarious working conditions blossoming under neo-liberal economic regimes have distilled this kind of fear into its purest essence and made it the defining narrative of many people’s lives. 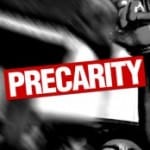 Will my employment contract be renewed? The funding for my job removed altogether? Will I get my next ‘free-lance’ gig? Will my landlord kick us out so he can raise the rent again? Such anxieties do not exist externally to us but enter our bodies, determining the very kinds of people we are. The education and qualifications we so carefully acquire are not experienced as enriching, but as safeguards and barriers put up to protect us from something worse. Far from releasing us from the conservative social rhythms of Fordist modes of production, precarity has made us even more disciplined and risk-averse. We work extremely hard. We rarely say no to our boss. And we make cruelly rational economic decisions about what kind of families and relationships we can ‘afford’ to have.

But although this kind of fear can often seem totalising in its ability to determine the way we live, in certain moments (of political urgency) it can simply melt away. The explosion of student protest early this winter for once brought our personal production lines grinding to a halt. Politics stopped being, just for a moment, something to be efficiently fitted into busy work schedules and became a thing to live inside of. For revolutionaries whose practices had been formed under the cosh of neo-liberalism, the ‘liberation’ about which we so often spoke became tangible for the very first time.

Yet the release could only be temporary, for the fear generated by economic insecurity have a material basis that cannot be simply wished away. If we want the nightmares to stop, we need to do better than valorise the rolling-stone revolutionary subject – he who cares nought for how the next gas bill gets paid. If precarity has anything to teach us it is that freedom requires security and that feeling brave is also about feeling safe.

Our fragilities need to be approached not as individual weaknesses to be brushed aside or overcome, but as offering the potential for alliance and movement building. We know what this might look like in the abstract: collective resistance to house evictions, unemployed workers unions, food co-ops and community childcare being only some of its more obvious forms. But to take the first steps requires a subtle and extremely tricky mental shift away from our individualist and productivist approaches to ‘doing’ politics. Paying closer attention to the social relations generated within our collective projects is not necessarily about slowing down, but it is about rejecting the market orientated obsession with immediate outcomes. Rather we need to find a way to move together, as slowly or as quickly as possible, to create a sustainable response in this moment of political urgency.