You are here: Home / 3 Ed One / A revolution against neo-liberalism?

Two observations about Egypt’s history as a neo-liberal state are in order. First, Mubarak’s Egypt was considered to be at the forefront of instituting neo-liberal policies in the Middle East (not un-coincidentally, so was Ben Ali’s Tunisia). Secondly, the reality of Egypt’s political economy during the Mubarak era was very different than the rhetoric, as was the case in every other neo-liberal state from Chile to Indonesia. Political scientist Timothy Mitchell published a revealing essay about Egypt’s brand of neo-liberalism in his book Rule of Experts (the chapter titled ‘Dreamland’ — named after a housing development built by Ahmad Bahgat, one of the Mubarak cronies now discredited by the fall of the regime). The gist of Mitchell’s portrait of Egyptian neo-liberalism was that while Egypt was lauded by institutions such as the International Monetary Fund as a beacon of free-market success, the standard tools for measuring economies gave a grossly inadequate picture of the Egyptian economy. In reality the unfettering of markets and agenda of privatization were applied unevenly at best. 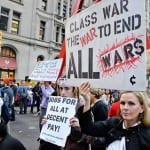 The only people for whom Egyptian neo-liberalism worked ‘by the book’ were the most vulnerable members of society, and their experience with neo-liberalism was not a pretty picture. Organised labor was fiercely suppressed. The public education and the health care systems were gutted by a combination of neglect and privatization. Much of the population suffered stagnant or falling wages relative to inflation. Official unemployment was estimated at approximately 9.4 per cent last year (and much higher for the youth who spearheaded the January 25th Revolution), and about 20 per cent of the population is said to live below a poverty line defined as $2 per day per person.

For the wealthy, the rules were very different. Egypt did not so much shrink its public sector, as neo-liberalism doctrine would have it, as it reallocated public resources for the benefit of a small and already affluent elite. Privatization provided windfalls for politically well-connected individuals who could purchase state-owned assets for much less than their market value, or monopolise rents from such diverse sources as tourism and foreign aid. Huge proportions of the profits made by companies that supplied basic construction materials like steel and cement came from government contracts, a proportion of which in turn were related to aid from foreign governments.

The political economy of the Mubarak regime was shaped by many currents in Egypt’s own history, but its broad outlines were by no means unique. Similar stories can be told throughout the rest of the Middle East, Latin America, Asia, Europe and Africa. Everywhere neoliberalism has been tried, the results are similar: living up to the utopian ideal is impossible; formal measures of economic activity mask huge disparities in the fortunes of the rich and poor; elites become ‘masters of the universe,’ using force to defend their prerogatives, and manipulating the economy to their advantage, but never living in anything resembling the heavily marketised worlds that are imposed on the poor.