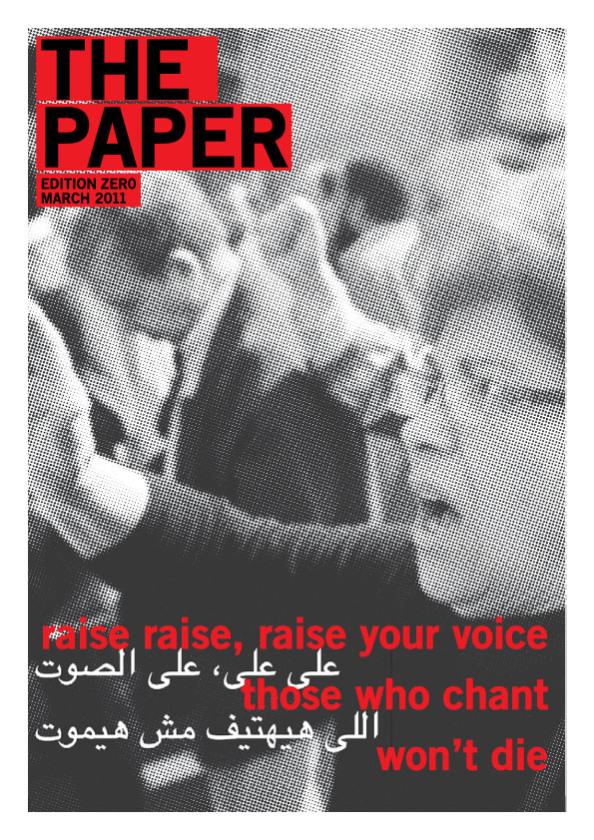 The people who disobey. The people who resist in the obscurity of everyday life. The people who, when forgotten too long, remind the world of their existence and break into history without prior notice… There is no oppression without resistance. There is only time stretching more or less slowly before unexpected—or out of sight—the collective heroism of a people arises.

We have witnessed amazing events on television – mostly via Al Jazeera – in which puppets of power are being pushed away and a new world born. They say these are youth revolts and call them spontaneous eruptions of demands for civil liberties and democracy. Yet across North Africa, everywhere from the streets to the factories to the universities, there are strong, established and radical organisations. In the story we are told the liberties and democracies demanded are, of course, ‘like ours’. The newly humanised ‘Arab street’ is compared with 1989 and the triumph of ‘freedom’ over authoritarianism. This all seems like the kind of transition they wish to see. A shift to ‘stable’ democracies, where wealth isn’t redistributed, where hierarchies and inequities go unchallenged and, most importantly – the oil flows. So notes of caution are issued: rights must be respected – the right to property the most sacrosanct of all.

Pause this scene – what is unfolding?

A re-activation of the ‘colonial machine’ of power emerges in the distinction between ‘us’ and ‘them’. These revolts can – and frighteningly most probably will – allow for the reappearance of these methods of domination onto these oil rich territories, continuing the extraction of valuable resources and labour. It happened back then, in the world after the Second World War, when most of the colonies in Africa became independent, and there is no reason to believe it will not happen now. In the world after the 2008 financial crisis, the colonial machine is enabled to complete its task: to clear the political grounds and prepare the terrain for another cycle of displacement, dispossession, and death.

The question at stake, then, is whether the movements can maintain momentum, continue to mobilise and stay organised. If not, new regimes will likely [re]appear, similar to the ones so recently pushed from power. The newfound self-confidence of the people will fight to co-exist with a recomposed elite that remains suspicious and fearful of the people. If the mobilisations continue we might see the establishment of parliamentary democracies. But there is another option, that of a continuing revolution; tearing open the economic and political structure, refusing the dying Pax Americana and instituting another way of living together beyond both an empty democratic theatre and an economic system built on blood and sweat, that profits only the few. It is within this choice that our hopes and dreams lie. The images that we see, of those that are not us, promise so much.

If we desire to be more than mere spectators, we need to get closer and closer to the screen and finally crack the looking-glass. It may be that making a collective newspaper is as much about investigating the behind-the scenes practices, the mechanics of working together, as it is about the finished product. What can we learn from ‘doing’ together? Which of our own experiences might prove useful to all of the other clusters of people out there learning, like us, what it means to create collectively? In grappling with these questions, we trip up a lot, we argue over what should be printed in The Paper and over what we want it to become.

In the next edition (Edition One) we will be paying attention to ‘Fear and Disobedience’. How is fear used to govern and rule and how, through resisting the discipline, violence and laws imposed on us, can we stand together and feel strong? As we look around us – at university lecturers balloting for strike action and at trade unionists, workers and students preparing for the 26 March demonstration – we gain courage from the sense that our own squabbles, terrors, jokes and projects might be part of something bigger – something that demands to be taken seriously.