They’re not on our side

On January 11 Paul McKeever, chair of the Police Federation, publicly hinted that police forces may demonstrate over job cuts. Due to the same budget cuts the Coalition government is pushing across public services, as many as 20,000 police force jobs are under threat. This has prompted an extensive internet debate between various anti-cuts activists around the question: should we march with the police?
On one hand, some argue any job loss is a personal tragedy. Perhaps, even though these are the very people trying to prevent our anti-cuts demonstrations from being effective (kettling and beating us in the process), we could claim the moral high ground by showing them some solidarity. We might win the cops round to an anti-cuts position that would benefit us on further demonstrations. 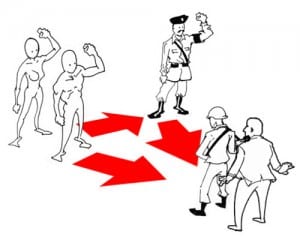 This argument, though well-meaning, is naïve. An individual police officer might sympathise with the aims of the protest they are policing. But it is still their job to keep public order – and that means following orders when it comes to repressing protest. So, they are not on our side.

We might want to win some of them over anyway, of course, but it’s important to think about what that means in the situation we’re in. Being a copper is in direct conflict with radical political activism. The police form part of the armed wing of the state. Their reason for existence is to keep public order. We’re going to need to seriously disrupt public order to even begin to challenge the cuts, let alone the wider capitalist system and the state. For us, winning over individual police can only be a case of persuading them not to be police any more.

Marching alongside the cops in their attempt to stop job cuts is hardly going to achieve this. Joining in such a demo explicitly suggests you don’t want a cut in police numbers – that the police are just fine as they are. It’s hard to imagine many useful conversations on such a demo; after all, those marching are against the cuts in their jobs whilst being perfectly happy to physically, often violently, quash dissent against cuts to anyone else’s. Their role makes this a different question to organising solidarity with other public sector workers, which can only strengthen any anti-cuts movement. By supporting the police, we’re excluding a huge chunk of analysis from our own anti-cuts agenda: that of how the state operates, and how to effectively challenge it.

Some have argued, however, that it’s wrong to see the police as our enemies outside of protest days and they are not on our side. After all, their day-to-day job is more concerned with solving crime. Working class communities are hit hardest by crime, and report the highest levels of fear of crime. Being robbed is pretty shit, even more so when you have very little yourself. Living in fear of going outdoors, or having someone break in to your house, is debilitating. The police force plays a limited protective role in these cases – were it to be abolished tomorrow, life would be more difficult for many people.

The key word, however, is ‘limited’. Anyone using this argument to back up support for the police – and for, essentially, maintaining or increasing police numbers – should dig a little further into crime, and where it comes from. The Howard League for Penal Reform reports that 78% of all people sentenced to custody were convicted of non-violent crime. It’s a pretty much undisputed fact that the vast majority of crime is acquisitive – stealing stuff to make money (often in order to fund a drug addiction), or, in the case of many women, shoplifting to support families: 54% of women in prison in 2000 cited their lack of money as a reason, 38% the need to support children and 33% having no job.

Simply regarding the police as defenders of working-class communities occludes all this, and the structural reasons behind the majority of crime. Poverty, lack of opportunity, drugs, shit low-paid work – all these factors contribute to crime, and none of them are anywhere near solved by the actions of police. Arresting, charging and imprisoning someone might stop them breaking into your house or car
for a few years, but it does nothing to resolve the underlying problems; it often fuels a cycle of unemployment, crime, mental health problems and addiction that condemns thousands to misery.

Privilege – They’re not on our side

In this context, ‘protecting working-class communities’ looks rather like the opposite. The police defend the state against protestors challenging the very structure that produces crime. A better-funded, more extensive welfare state, an end to the poverty pay of the minimum wage, the abolition of the elite academy and free schools that sap money from state schools in working-class areas, free education at all levels and more – these are measures that would cut crime. And when we march for them, or to defend the limited welfare state we have left, the police are on the other side of the barrier, defending privilege. They’re not on our side. We shouldn’t be on theirs.