You are here: Home / 1 Ed Minus One / Our Violence 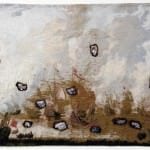 “For law-preserving violence is a threatening violence. And its threat is not intended as the deterrent that uninformed liberal theorists interpret it to be.”

Rather than focusing on acts of violence carried out by police, rather than peering at Westminster through lines of state control, we must recognise and reiterate our own responsibility for the violence that has taken place over the last few months. The idea that we are victims of the state must be overcome; we are actors within it, and it is ours to reclaim through the means we have available to us. More radical than resisting the kettle is surely resisting the idea of its existence. In Parliament Square on 9 December, there was no question that the police would detain without charge the thousands of protesters present. Those who stayed, for the most part, did so in the knowledge that they would not be let out for hours. The gathering of a contained mass became a tool of power, rather than an aberration of human rights. Kettling, whether through physical force, through media discourse, or through government threats, is a symptom of a weak state. It is with this image of a weak state that we must move forward as a movement. The strength of reclaiming the kettle, of taking responsibility and taking agency for and within our own confinement relies on a collective understanding that our physical presence is a threat to the state, and refusing to apologise for that.
Full text available at http://www.scribd.com/OptimismStrategy