The first in a regular series of DIY, how to guides and practical step by step instructions for making trouble and influencing people. The first in our series caused quite a stir the first time if was printed in 1995 by a student newspaper in Australia. Handy if you want a duck house for your pond. 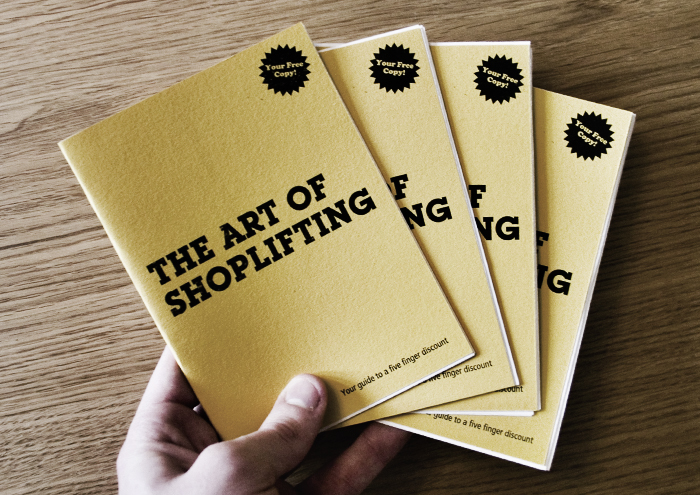 Shoplifting is a topic that is practically relevant to many and it should therefore not become an exclusive craft confined to a small shoplifting elite. On the contrary, shoplifting is an art that deserves the widest possible dissemination. For your convenience we have printed below a step by step guide to shoplifting. Good luck.

Within capitalism, most of us are either (1) alienated from our labour and hence dependent on the ruling classes for commodities as basic as food and clothing, (2) excluded from the division of labour, in which case we are likewise dependant on the State, or (3) performing unpaid and/or unrecognised labour and hence dependant on patriarchal relations for food, clothing, etcetera. In any case, our access to resources is severely limited by contemporary relations of domination. One partial solution to this problem may be to STEAL.

Sadly, however, many people living precariously on low incomes tend to either: (1) avoid shoplifting for anachronistic moral and/or ethical reasons; or (2) remain ignorant of the better methods and techniques of shoplifting, thus failing to maximise their lifting potential. From the onset, the golden rule of theft should be enunciated: NEVER STEAL FROM SOMEBODY WHO COULD CONCEIVABLY BE A COMRADE. Hence kicking into a house on Bell Street with a beaten up old Mazda in the yard is irresponsible and counter-revolutionary! Be careful, too, about taking stuff from small ‘corner store’ type shops — you could be ripping off someone in a situation not dissimilar to your own. On the whole, it is best to play it safe and go straight for the big corporate fuckers.

Some people will suggest that shoplifters are a selfish breed, since ‘we all pay for it in the end’ through inflated prices to cover losses and so forth. However, comrades, this and closely analogous arguments are used to justify lowering wages, breaking unions, lowering corporate taxation and taxation on the rich – we may as well sell ourselves into bonded slavery now, or join the Liberal Party. What follows is a list of effective methods and observations that may prove useful.

0.      Preparing oneself for the big haul:
– If possible, you should always have some money on you when intending to shoplift, because if you’ve got none, it’s rather hard to argue that to steal the item was a spontaneous decision. As a result, if you’ve got no money and are caught shoplifting you are more than likely to be charged for burglary as well as theft.

– Buying something at the same time that you steal stuff doesn’t necessarily ensure success. Approaching staff for items you are absolutely sure they don’t have is just as good. Think of something that you know they don’t have (i.e. a doona cover with a specific pattern on it or something equally obscure) and pretend that you are looking for this, so that you have an excuse for being there. If staff are ever suspicious of you or ask if they can help you, ask them if they’ve got the thing you are sure they don’t have. Never screw this up — if you do you will have to buy the item or they may realise that you are there to steal.

– It is always a good idea to carry a bag although you should never stash anything in it — if security/sales staff are suss on you the first place that they’ll check is your bag and it may just get you off the hook if they can’t find anything suspicious inside of it.

– Remember that there is no such thing as a standard store detective — there is no qualifying dress code, age, race, gender or class. Grandma will bust you this week and next week it’ll be a 5 year old kid.

1.      On entering the maze:
– Don’t be put off by signs such as ‘shoplifters will be prosecuted’ or ‘security police patrol this store’. Often this is just bluff anyway, and in any case there is no security measure that cannot be undone by a clever shoplifter or a quick talker. Do, however, keep your eye on security and be on the lookout for video surveillance cameras.

– Try to find where the video surveillance monitors are and who is watching them; often they are not even looking at them. See if you can get a glance at their monitor.

– It is a good idea to keep your back to the camera as much as possible without looking suspicious. Check out cameras (hold-up cameras) are often set up to check on employees, so they are not hard
to keep your back turned to.

2.      Blind-spots and other lifting techniques:
– A blind-spot is a section of the store where you are barely visible and can thus feel free to both dump and collect stuff, without fear of being seen. Display units can make perfect blind-spots — they ensure security is confident they have their eye on you, when in fact they can only see your top half — at the same time they enable you to keep your eye on security.

– A good method is to take everything you want to your blind-spot and collect it all later in one go, or better still get someone else to collect it for you. Getting someone else to collect for you can be a great system. If you are really pedantic, or you think that they are watching you, then load up, go to the toilets and pass the stuff under the wall/partition of the cubicle to a waiting friend in an adjoining cubicle and get them to leave with it.

– Speaking of dunnies and change-rooms, one of the oldest tricks in the book is to put more than one garment on a hanger (works particularly well with women’s underwear), go to the change-rooms and put the garment underneath what you are wearing. Alternatively, if you are a woman, you can slip your old bra on a hanger and put on the new one.

– On the subject of women’s underwear, the lingerie department is ideally suited to male shoplifters — not only is it the perfect excuse for looking embarrassed or suspicious (they have come to expect this), but staff are less likely to harass you by trying to help you and will be more sympathetic generally.

– If people are watching you, whatever you do, do not try to discreetly dump stuff unless you are absolutely sure that you can get away with it. If caught dumping stuff they usually won’t charge you but they may fuck you around for a few hours.

– NEVER GET TOO CONFIDENT or you will start to make silly mistakes.

4.      The end:
Finally, if you get caught — lie your teeth out! Never admit to premeditation. Always say that the opportunity arose, so you took it. Don’t act tough or be a smart arse. Cry. Bawl. Admit a guilty conscience. Beg them not to call the cops. Tell them that CSV will take your kids off you and then weep. If the cops do arrive, it’s a good idea to act scared shitless because they may assume you’re a first offender and not bother to check your record. Don’t antagonise the filth — it is their personal discretion as to how bad you get busted.

* As a result of blatant abuse of political power, the four editors of the student newspaper Rabelais were prosecuted for publishing this article. Despite threats of legal action, seven other student newspapers re-printed the article at the time. The case made it all the way to High Court of Australia, but in 1998 the charges against the editors were dropped.