You are here: Home / 5 Ed Three / The Accomplice 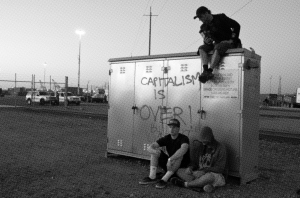 The Accomplice of Love

And, make no mistake, this most intimate absence, this most missing love is a political one, too.

Here is how Walter Rodney writes about what we call the accomplice:

Now the people Rodney is writing about were labeled by their own government as criminals. They were regarded by that government as disposable, literally removed to the garbage dump where Rodney sat with them. Nor were they, like Rodney, historical materialists in any strict sense, and indeed they seem at moments to move Rodney away from his materialism toward we might say some other cosmic materialism. They were, in other words, invisible both to the government and to the revolution, and yet as Rodney recognises, the revolutionary learns from them, is opened by them.

To grasp the importance of this apprehension of accomplices in Rodney, think of it in contrast to this passage from Frantz Fanon:

‘For example, the gangster who holds up the police set on to track him down for days on end, or who dies in single combat after having killed four or five policemen, or who commits suicide in order not to give away his accomplices – these types light the way for the people, form blueprints for action and become heroes. Obviously, it’s a waste of breath to say that such-and-such a hero is a thief, a scoundrel, or a reprobate.’

And yet Fanon does waste his breath here because for him such people labeled by the police as criminal were also unready for revolution. They had not become new men, new revolutionary subjects, had not changed. But the accomplice does not need to change, the accomplice is the one who tells you by her absence from the revolution, that she is already revolutionary, already untimely. She is already, in Kwame Toure’s words, ready for a revolution.

‘But you learn humility after you get in contact with these brothers… you learn humility because they are teaching you. And you get a confidence that comes from an awareness that our people are beautiful. Beauty is in the very existence of black people… these brothers who, up to now, are every day performing a miracle… They live and they are physically fit, they have a vitality of mind, they have a tremendous sense of humour, they have depth. How do they do that in the midst of existing conditions? And they create, they are always saying things…’
And seeing things and hearing things. The accomplice is already elsewhere opening us, teaching us, loving us, here.