You are here: Home / 5 Ed Three / Regeneration, repression and dispossession: eviction from the entrepreneurial city 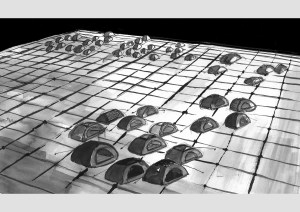 In August of 2009 the Islington Tribune reported on a story that revealed with unusual clarity the logic at the core of recent ‘regeneration’ projects in the UK. Having already reneged on promises to expand transport services, provide green spaces and social housing to abut the newly built Arsenal Emirates stadium, Arsenal FC apartments announced that children from what little social housing remained at the complex would be barred from entering the 3,000 sqm on-site playground. This main playground would be reserved only for children of parents who were private flat owners, while children from social housing would instead be provided with small green spaces.

The Arsenal case is emblematic of a broad and diffuse logic of enclosure (privatizing and limiting access to space) that permeates the ongoing project of ‘regeneration’ in London and the UK. It is this that lies in the background of seemingly discrete issues such as long prison sentences for student protesters, evictions of ‘rioters’ and Traveller communities and the development of the London Olympic site. Just as the state seeks out new ways to criminalise and repress public protest, a new series of strategies and justifications to dispossess the people of any property and housing owned publicly or held in common continues apace. Yet what may be particularly novel in recent years is the specific ways these two strategies of enclosure have intersected with one another: repression and dispossession are increasingly employed together to produce a cleansed entrepreneurial city.

This connection is most brutally apparent in recent evictions of the families of individuals convicted of crimes associated with the August 2011 riots from their social housing. Wandsworth Council proudly led the way in beginning eviction proceedings against the mother of a man charged with ‘riot-related’ crime. At least 9 other councils have already announced they’ll follow suit. It is unclear whether these evictions will be upheld given how clearly they contravene the right to housing. However, they nevertheless point to an increasingly clear association – by both the state and in popular media – between social housing and criminality. Collective punishment (via eviction) opens the door to a new strategy of ‘dispossession by criminalisation’. The Thatcherite policy of the ‘right to buy’ council homes becomes amplified by a right to evict people from them. This becomes clearer still in the government’s new Localism Bill that seeks to shorten tenancies and remove lifetime tenancies altogether, removing all security for families in social housing.

Sometimes outright dispossession is not immediately possible. In this case, other forms of enclosure come into use. ASBO tactics which restrict and criminalise ‘minor incidents’ such as spitting or ‘intimidation’ are familiar. Yet the increasing use of ‘dispersal zones’ on council estates and elsewhere is even more draconian. These give police powers for 6 months at a time (renewable) to disperse individuals if their presence ‘has resulted, or is likely to result, in any members of the public being intimidated, harassed, alarmed or distressed’. Failure to observe an order to disperse is a criminal offence. Despite a paucity of statistics, it is assumed that over 1,000 dispersal zones are in existence in England. Beyond their use in areas or amongst people labeled ‘problematic’ (read: working class), similar anticipatory and collective punitive tactics are also increasingly employed in the policing of public protest: pre-emptive arrests such as those in the run-up to the royal wedding and the pervasiveness of ‘kettling’, amongst others. Collective punishment has also become widespread in the form of outrageously long sentences for those convicted of even the most minor crimes during forms of collective protest, such as the ‘riots’ or the student protests.

This relationship between repression and dispossession emerges again in the government’s recent white paper on squatting rights. Criminalising trespass would provide the police with a further tool in curbing protests and in particular, occupations. It is also likely to be employed to evict Traveller communities. At the time of writing, the Traveller community of 86 families at Dale Farm in Basildon, Essex has been forcibly removed from land they own (transformed from a former scrapyard), but which the council has refused to zone as residential. The increase in families at this site since the 1960s is itself the result of evictions from other sites in the South East of England. Besides the obvious racism faced by Travellers and the highly repressive nature of the eviction (police employed tasers as a tool of crowd control for the
first time in the UK), it is important to recognize that this eviction also sits within a broader project.

Basildon lies within the corridor that Thames Gateway Development Corp (LTGDC) has earmarked for ‘regeneration’, following on from the 1980s London Docklands redevelopment. This consisted of tawdry, overpriced, ‘loft style’ apartments and skyscrapers in a massive ‘enterprise zone’ which offered tax breaks and state-backed powers of compulsory purchase of private and public land to developers that has swelled to new proportions with the arrival of the Olympics in London in 2012. The area in which Basildon falls has been earmarked to create a leafy suburban idyll for commuting workers – hence the emphasis on the Green Belt in justifications for the Dale Farm eviction. The background to the eviction of Dale Farm is therefore a much broader project of extending the entrepreneurial city and removing and dispossessing those who do not belong there. The existence of Traveller camps clashes absolutely with these consumerist and capitalist objectives.

The governance structure of the organisations tasked with Thames Gateway regeneration is complex. Acronyms proliferate and change, corporations are restructured to take advantage of new, more favourable legislation, public-private partnerships emerge without any clearly defined relationship. Properties such as those on the current site of Stratford City (which also owns part of the Olympic site) have seemingly been shuffled between the state and developers incessantly over at least the past 15 years. The state provides capital with infrastructure such as transportation, cheap land – seized from individual groups or the public itself and sold at discount prices – and also buys back sites which prove to be unprofitable in particular market conditions. Similarly, the Mayor recently promised interest free loans to developers of the Olympic site after 2012. The state acts as an agent for developers, creating favourable conditions for investment, while also absorbing risks and costs.

In its ghastly pink and tasteless font, the 2012 Olympics website proudly displays one of its victims – not unlike an angler with his catch – the Clay’s Lane Estate. Once Europe’s second largest purpose-built housing co-operative, all 425 residents were evicted under a compulsory purchase order provided for the whole of the Olympic site. Another 35 Traveller families and 64 allotment holders were also dispossessed of their land, while a number of historical commons including Lammas land were appropriated within the bounds of a 306 hectare site earmarked for the Olympic park and Village.

The number of ‘affordable homes’ promised to be built on the Olympic site has also consistently decreased. The very meaning of ‘affordable’ housing itself is such a flexible term that it can encompass anything from social housing to part purchase of homes for households earning as much as £74,000 per year. Moreover, since the project is not funded past 2013, studies have suggested that following the Olympics, the lack of a budget could be used as a justification for taking all of this land and infrastructure away from the public and given to large developers at highly discounted rates, as was done following the Sydney Olympics.

Yet more mega-developments are afoot. In 2010, the LTGDC gave planning permission for what will be one of 5 of the first Tesco ‘villages’ in the UK in Bromley-by-Bow. A hyper-store, itself too big for the ubiquitous term of mega-store, will neighbour a Tesco-built school, hotel, and 454 homes all owned by the retailer. Residents concerned about the continued closure of local libraries will be satisfied to know that Tesco has promised to build an “idea store.” Any queries on what the latter will look like should be directed to the bookshelves in one’s local Tesco.

There’s more. One could also point to the green spaces to be called ‘Adi-zones’ sponsored by the sporting giant Adidas, though maintained by local councils; the housing projects to be developed by Stratford City; the 18,000 plus home repossessions that occurred in the UK in the first half of this year; plans for increased police powers because the Olympics; and so on.

It is perhaps within these twin fronts of dispossession on the one hand and repressive policing on the other, that we might view the recent explosion of occupations, despite all of their contradictions, as one appropriate form of resistance. For here we arrive at a tactic which seeks to transform the privately enclosed and the repressively policed space into something public and open to all.