You are here: Home / 5 Ed Three / Lecturers Defend Your Students

Collective expressions of political opposition are the most terrifying thing in the world – if you’re the government, police and courts, that is. The past few months have seen an incredible crack-down on protest and heavy sentences handed down to anyone involved in a public order situation. Just as “rioters” have received lengthy and explicitly exceptional sentences, so too have those who’ve been accused of serious public order offences relating to the student protests of last November and December. 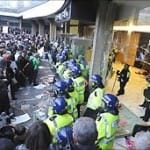 Defend the Right to Protest, a campaign set up to help defend students and other protesters, and to help get the message out about police brutality, is setting up a Lecturers campaign, as a way of not only helping those students already facing trial, or already imprisoned, but also to provide a pre-emptive support network for those who may be hassled or arrested by the police at future demonstrations and occupations.

It Is Imperative That Lecturers Defend Their Students:

Not only is it politically consistent (many thousands of lecturers attended the 11 November demonstration last year, many marched with their students on the 26 March and 30 June this year, many supported the campus occupations and were grateful when students came out to bolster picket lines in our on-going fight for pensions), it is also a way of making very clear where the dividing lines are: not between staff and students, but between the government and all those that are fighting against austerity and privatisation.

There is much more to do: we need to get the message out about what to do when arrested. Too many young people are pressured into ‘confessing’, to accepting a caution, to pleading guilty to offences they haven’t committed. We need to ensure that institutions do not try to expel students when they come out of jail. We need to get the message out about legal rights and about the political nature of current public order policing; and we need to fight against having police on campus, and against being told to spy or inform on our students. The student-client is, in the minds of the government and management, only ever one step away from being the ‘dangerous’ student, the ‘student-radical’. We must resist this expansion of the category of student domestic extremist, which has been applied to Muslim students for many years already, and cut off this suspicious, policing role at its root.

Lecturers should be prepared to support the families of arrested students and to stand by those people we teach, whenever, wherever – without them, we’d be nothing. If teachers/lecturers would like to get involved in the campaign, by being a point of contact at their institution, or anything else, or if you have ideas/experiences of your own, please contact Nina Power (ninapower AT gmail.com) for further information.