In calling this a ‘survival guide’ I guess I’ve already wrong footed you: people’s vicarious view of prison is that you’ll arrive, get robbed, get banged up with a psychopath and then get raped in the shower. In reality it’s nothing like this… I ended up on the high-risk wing of one of England’s most notorious jails and I had no problems whatsoever. 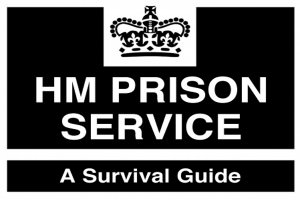 With a few bits of survival guide , your own bed sheets and a radio it becomes even easier, so please share this with anyone you know who’s on bail or inside, repost it, plagiarise it, whatever. Just a note… this isn’t all encompassing… I’ve never sat a parole hearing or had to serve a life sentence. Survival guide will help anyone facing prison but is probably better suited to those serving a ‘shit and a shave’ (that’s a shorter sentence, a couple years or less, by the way).

And also I’d just like to say that subreptives I’ve included in here are already well known to the authorities: they know how you make hooch, they know that people charge their phones with a Playstation and they know you can build secret compartments in cupboards. I haven’t included anything that is unknown. There are an ever dwindling number of things they don’t know and I have obviously left them out.

Prison is jam-packed with stupid, aggressive and pugnacious people. And then there are the inmates: most of them are harmless. Still, I’d recommend you to keep yourself to yourself until you’ve assessed who you can be yourself with. Considering the media hype and most peoples vicarious view of prison, violence is relatively rare. But in general, adhere to the following simple rules and prison is probably safer than your average provincial high street on a Friday night. Don’t be wet, but at the same time don’t walk around like you’ve got a nuclear warhead up your rectum. Never ever grass anyone up. Don’t steal from people.

Over the first week or two you’ll do ‘induction’. They’ll explain to you how to go about ‘kit change’, library, meal slips and all the rest. At some point you’ll be further assessed and they’ll ask you all the usual: are you suicidal, do you have violent antecedents, do you take drugs, etc etc. Whatever you do don’t even admit to having smoked weed in the past, they’ll treat you as a ‘user’ and put you on weekly ‘mandatory drug testing’ for the rest of your sentence.

The system will come as a shock to your own… you’ll be astounded at how inefficient prisons are, how much stuff gets thrown over the fence and how preventable it is, how little support is given to illiterate people and drug users when this would quite obviously reduce the likelihood of them reoffending, how many people are serving such small sentences for crimes against people and how others are serving huge ones for crimes against capital, how many reformed offenders are rotting away on indeterminate sentences five years past their release date, and how bitties smoke teabags wrapped in bible pages when they’ve run out of cigarettes.

A Survival Guide to Prison

That leads me nicely on to cigarettes: as there is no money behind bars, prison is basically run on an economy of tobacco, and sometimes tins of tuna. A haircut will set you back two tins of tuna, getting a kitchen guy to get you some black pepper or having your cell repainted by the wing painter or a spliff of hash will set you back a half ounce of burn, one of those horrible match stick jewellery box things might set you back two ounces, and so on. Even if you don’t smoke it’s worth having some tobacco stashed away so you can buy something if you need it.

HMP – A Survival Guide can be downloaded here: http://www.prisonism.info/