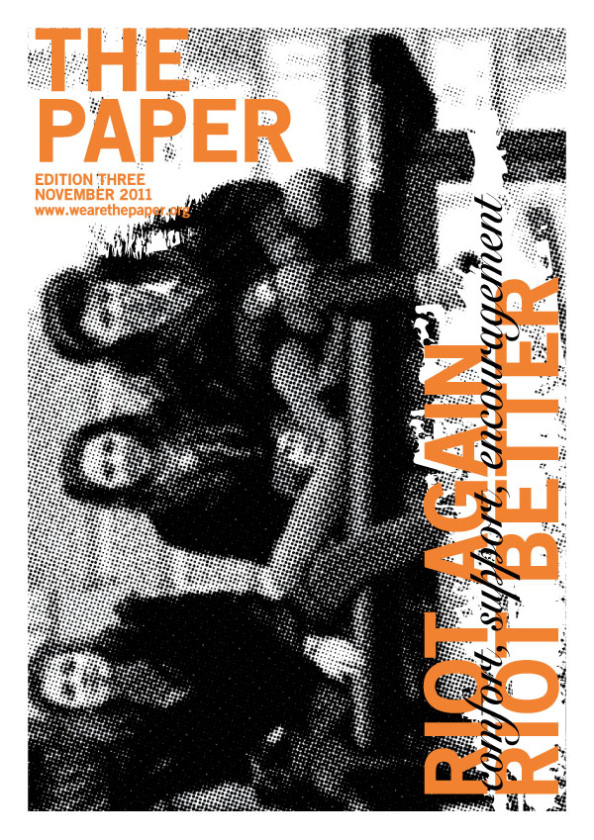 What is clear is that Lord Judge is scared. He is scared of solidarity and care. The system of institutional politics and law works by separating us. It fears the processes by which we come together as collectivities in struggle, solidarity and care. Where we touch each other, and become ‘untouchable’. Beneath the riot, the looting, the struggle (and also beneath the occupation) are the bonds that bind our bodies together. Friendships, bonds of intimacy, a solidarity born from being together – not just in the moments of rebellion but also in the day to day. They fear us acting together, because at the basis of their power lies our separation. In occupation, on strike, on the streets, claiming property – the gang, the camp, the union, the commune.

Clearly, the riot continues. It continues among those who briefly took over the streets, in the mounting pile of court cases. It continues in the friendships that were forged or fortified and the acts of solidarity and care that were there, and came after. We might wonder how many face the prosecution of their trials alone? How many carry the riot in their body with no one to talk to? Where does the riot still exist, what traces has it left behind? And what can we do to make those intimacies live again?

To ask ‘what can we do now?’ requires understanding the riot as continuing and shaping desires in the present. We need to ask in what ways do the possibilities and the limitations of the riot create a desire to invent, learn, or develop new capacities, ideas, modes of organising, etc.? The question is not only ‘what was in the riot for people?’, but ‘what was in the riot that was more than the riot?’
While the first question is only for the rioters, the second is broader. We are all living a crisis, but living it differently. Some suffer a less tangible destruction where their future possibilities disappear while daily life seemingly goes on as before, only greyer, duller, deader. For others, those who felt their future died a long time ago, the crisis lives as a moment of pure violence: not only job losses, or pay-day loans, or debt piled upon debt, eviction and homelessness, but ever-intensified policing and repression.

The crisis has drawn these two moments closer together – the loss of a future and of never having one. The daily effects of job losses, welfare cuts, rising food costs, heating becoming a decision, of gentrification, and the racist policing of these crises are as clear in Pembury and Broadwater Farm Estate in London as they are in so many places across this country, not to mention beyond it. No wonder the riots were ‘contagious’.

But gaps nevertheless remain among us. To remain attached to the old future and ‘aspirations’ leads to a politics of nostalgia and fear. Fear of the ‘underclass’ deepens, fear of those who don’t aspire, those who have nothing much to lose. Against this, our task is to build connections of solidarity between those whose future is closing, and those who feel they have none. Do we occupy to reclaim a lost future, or do we occupy to open space and time for the creation of a different kind of future altogether, one that works for another kind of us? The future has for too long been a means to enslave many of us in debt and overwork, of trapping us on property ladders and career paths. Our task is to realise that we’ll never own a house in our fucking lives.

So let’s not ask ‘what were the politics of the riot’, or what was it ‘trying to do’ but how does the riot continue and how can we, together, make it continue, better, more productive of ‘comfort, support and encouragement’? A year ago we rioted together at Millbank. Somewhere, sometime soon, we will riot again. Now let’s ask: how do we riot again, how do we riot better?