You are here: Home / 3 Ed One / Wisconsin: The Struggle Against 21st Century Wage Slavery

The return of struggles against wage-slavery in the US makes for some strange alliances, and introduces an entire generation to the inspirational education of the extended strike. 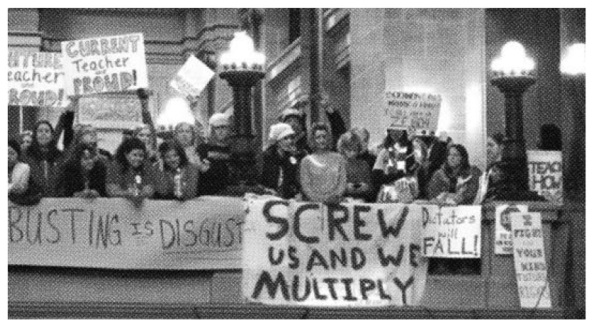 Wisconsin and the ‘bad surprise’`

Many predicted that the financial crisis beginning in 2007 constituted the end of the neoliberal phase of capitalism in the US. The trajectory from Lehman Brother’s collapse in September 2008 and the mid-term elections of 2010, however, revealed a different story. As in a horror movie, homegrown US neo-liberalism wearing a tricorn hat of the ‘Tea Party’ has been revived in the US at least. Instead of being stabbed in the heart, neo-liberalism seems to have been rejuvenated by a fresh infusion of blood and money.

But a worse ‘bad surprise’ of the crisis has been the US working class’s lack of political response against the trillion dollar bail-outs and tax breaks for big capital, the billion dollar austerity budget cuts, and the millions of foreclosures. There was a hope in the anti-capitalist camp that the crisis would be the ignition of a new cycle of struggles. But the collapse of strike activity in the US in the crisis was a decisive negative indicator (however problematic the number of official strikes is as a measure of proletarian militancy). There were only 21 major strikes (i.e. involving more than 1000 workers and lasting more than one day) in 2007, 15 in 2008 and 5 in 2009. This was almost a non-response to the attack on wages and working conditions that transpired in the last few years and in comparison to (a) the last period of intense crisis in the US, 1975-1984, when there were on average 179 major strikes per year and (b) the immense strike/riot/revolt wave that has engulfed other parts of the world (from Greece to Thailand to Bangladesh and to North Africa) in the last few years.

There is certainly no inevitability about this lack of response, for no strict negative correlation exists in US history between the unemployment rate and the number of strikes. Workers, though prudent, are not like their namesakes, robots (and even the robots rebelled in Capek’s 1921 play R.U.R). Just because the unemployment rate goes past 5 per cent doesn’t mean that workers will all crawl before their bosses. Needless to say, the decade of the 1930s is a glaring counter-example to the correlation of unemployment and passivity.

Given this bad surprise, the recent explosion of demonstrations, walk-outs and state-building occupations in Madison, Wisconsin in defense of ‘workers’ rights’ has justifiably stirred the hope of many anti-capitalists. Is the struggle in Wisconsin is a sign that the US working class is finally joining with workers in the rest of the world in saying ‘basta’ to the machinations of capital and demanding another ‘out’ to the crisis besides the re-imposition of what was called ‘wage slavery’ in the 19th century, i.e., the condition that exists when waged workers are legally prohibited from collectively negotiating wages and work conditions?

The legislation that ignited the struggle in Wisconsin is cleverly meant to cause deep divisions in the ranks of the state police, between state police and other state workers, between ‘state’ workers and workers in the ‘private’ sector, between workers in ‘white’ states like Wisconsin and ‘black’ states like Illinois, between the US working class and the world proletariat. For example, police officers and firefighters were cynically exempted from the antiworker rights provisions of the bill. So the average cop is forced to confront a dilemma: “should I abandon my fellow unionized workers (teachers, clerical workers, etc.) as I’m being tempted to do or should I express my solidarity with them and suffer the consequences?” The Budget Repair Bill was presented as a piece of fiscal legislation to eliminate the budget deficit and requires state workers to increase their payments to their health and pension funds. That was to be expected, but it also prohibited state worker unions to negotiate with the government around issues concerning working conditions and wages (beyond adjustments for inflation). I.e. the law prohibited negotiation over issues that were standardly in dispute by imposing a ‘gag order’ on unions. This ‘gag order’ aspect of the legislation spoke directly of a return to ‘wage slavery’ and was the ignition point of the demonstrations and passions of the remarkable days of rage in February and early March 2011 that often paralleled the explosions in Tahrir Square in Cairo.

The legislation has the support of collective capital that in most cases is anxious to relieve itself of the ‘burden’ of the costs of the reproduction of the working class (now concentrated in two major programs, Social Security and Medicare). The class war can be partly characterised as an attempt of one class to palm off the ‘hot potato’ of this cost to the other. The capitalist class in the crisis has been especially interested in putting this onus on the working class (especially the state workers, who are now the most organised sector of workers). The formula for corporate bliss has been concocted in Wisconsin: corporate capital is excused from taxation on profits while any expression of state workers’ collective power is criminalised.

But Republicans like Wisconsin Governor Scott Walker have been chosen not only by capitalists to run the state (though he does fawn over wealthy capitalists like the Koch brothers). He and many other state officials were elected in 2010 as ‘Tea Party’ candidates. The ‘Tea Party’ presents itself as ‘revolutionary’, but its activists’ attack is not directed against ‘private’ capital (and for wages) but it is directed at the state (and against taxes). Though not the majority of the Tea Party cadre, there are many workers who support this politics. They seem to assume two axioms concerning power relations in the 21st century: (1) any effort to ‘soak’ capital and capitalists is a lost cause – i.e. the ‘rich’ are too powerful and too mobile in a globalized world to confront – and (2) the bulk of beneficiaries of ‘their’ tax money are other workers they deem ‘undeserving,’ i.e. poor youth, black people, ‘illegal’ immigrants, etc. ‘Tea Party’ proletarians combine inter-class despair with intra-class hatred. Together their axioms prompt them to conclude that they cannot win on the wage front – working class solidarity will always wither in the face of capital – and so the only basis for any kind of change in their incomes and life chances is through a reduction (or at leasta diminution of the increase) in taxation which is driven up, according to them, by the demands of the ‘undeserving’ poor and the ‘lazy and corrupt’ state workers, since they see state workers’ wages as simply ‘their’ taxes in another form. Property is not theft for them, but taxes are!

Wisconsin: a poor terrain for capital

Why has Wisconsin become the site of such a strong resistance to the revival of wage slavery in the US? Such questions are not easily (if ever) satisfactorily answered. But just a couple of facts about the terrain and class composition of the struggle there might be of use, especially for our comrades in England.

The location of the Wisconsin state capital, Madison, is a small city of 235,000, but it is also the home of the University of Wisconsin-Madison, with 40,000 students, 2,000 faculty and tens of thousands of workers. Though there are exceptions, university students, who are now facing debt slavery, are materially interested in escaping wage slavery as well; hence they have become immediate allies of the state workers. The students also are in opposition to the austerity budget regimes like Governor Walker’s that are increasing their tuition fees. The proximity of the state house to a huge university meant an army of student ‘foot soldiers’ living minutes away made it possible for masses of people to quickly respond to tactical shifts in the balance of forces. It is also important to note that the Wisconsin state population of five and a half million is 90 per cent white and 5 per cent black (with the bulk of the black population in Milwaukee far away from Madison). This means that the beneficiaries of state money are most likely white people like most taxpayers, hence short-circuiting the racist presumptions that underlie all discussion of state ‘welfare’ expenditures in the US.

This has put the neo-liberal right in a confrontational stance in a difficult terrain that is largely in control of the opposition (i.e., though the Republicans were in official control of the levers of government — the ‘public space’ — the actual state house has been turned into a ‘common’ by the opposition during much of the struggle). So secure has been the demonstrators’ control of the physical terrain of the state house that the standard efforts to send in agents provocateurs with the usual bag of tricks seems to have been rejected by the police, given the lack of ‘incidents’ reported.

If the Wisconsin showdown of the neoliberal Tea Party governor with the state worker unions was to be an update of the PATCO-Air Traffic Controllers’ strike for the 21st century, with Walker reprising Reagan’s Union-busting role, then this is backfiring. The resistance it is generating is already slowing down what was to have been a blitz of anti-public worker union legislation throughout the US this spring.

The score-card: Is Wisconsin a turning point?

In one sense, of course, the passage of the Gag Order Bill on 10 March 2011 appears to be the victory of the Governor Walker’s approach. But from another perspective, it is a decisive defeat. Remember, the legislation had two components: (1) various budget cuts; (2) a ‘gag order’ on issues unions previously negotiated, as well as a number of other classical right-wing antiunion provisions (e.g., the elimination of automatic dues check-off and yearly recertification). Walker called the legislation, SB 11, ‘fiscal’ and insisted that the reduction of union power was a fiscal measure as were the budget cuts. That is state workers’ unions’ power is an economic matter as far as the state is concerned. But here Walker was hoisted on his own petard, by being clever by half, he did not count on the Democratic legislators, emboldened by the mass demonstrations in the state house, fleeing to other states and robbing him and the Republicans of the quorum that is required in order to pass any fiscal bill in Wisconsin. By splitting the second part of legislation from the first – i.e. stripping the original bill of its blatantly fiscal aspects— Walker’s administration admitted that the revised bill was a political bill and that the attack on workers’ rights was not simply the product of financial prudence. Thus he
confirmed the arguments of the protesters, for by changing the rubric of the legislation from ‘fiscal-economic’ to ‘political,’ he admitted that either the original bill or the revised one was duplicitous.

The consequence of this ‘shell game’ does not have merely legal ramifications. The initial confrontation in the new battles against wage slavery in Wisconsin that the bill has provoked has had a tremendous effect on activists in the state. Remember, I mentioned the pitiful number of strikes in the US in recent years at the beginning of this piece. The main consequence of this inaction has been generational: most young workers have not had the experience of being on strike for long periods of time and have not had of experience of collectively risking their livelihood in a struggle. Governor Walker’s intransigence has unleashed the huge and, most importantly, repeated demonstrations, the occupations of the state house in the face of threats of arrest, and the continuous mobilization in Madison that has developed a cohort of young now experienced activists who will be important in the cycle of struggles against wage slavery spreading across the country.