You are here: Home / 3 Ed One / Fear that Stops Thinking

The Germans were over this house last night and the night before that. Here they are again. It is a queer experience, lying in the dark and listening to the zoom of a hornet, which may at any moment sting you to death. It is a sound that interrupts cool and consecutive thinking about peace. Yet it is a sound – far more than prayers and anthems – that should compel one to think about peace. Unless we can think peace into existence we – not this one body in this one bed but millions of bodies yet to be born – will lie in the same darkness and hear the same death rattle overhead… the guns on the hill go pop pop pop and the searchlights finger the clouds and now and then, sometimes close at hand, sometimes far away, a bomb drops.

/ Virginia Woolf
Britain is a bombed and bombing culture. This is captured in the opening of Virginia Wolf’s essay Thoughts on Peace in an Air-raid written for an American symposium on women in the war in August 1940. As part of the recent graduate Collective Futures symposium at Goldsmiths we took these insights for a walk along the New Cross Road. Pausing at the house of Barnes Wallis, inventor of the ‘bouncing bomb’ immortalised in the 1954 film The Dambusters, to read at the curb side extracts from W G. Sebald’s On the Natural History of Destruction. The plaque on Wallis’ former home makes no mention of his deadly inventions or the raids or attacks on the Möhne, Eder, and Sorpe dams in the Ruhr area that resulted in the drowning of close to 2000 people. Drifting down the street the group including students from all over the world stopped by the Rising Sun café to hear a reading from Virginia Woolf’s essay in the ‘bomb print’ of a V2 rocket that killed 168 people in 1944.

The readings evoked the shared human frailty of the civilians who died in Hamburg, Berlin and London. The sound of the bombers and the sawing noise of the propeller plans above, as they chopped the air induced fear in those waiting below hoping to dodge the deadly cargo. More than this, the thought of imminent death damaged the ability of those waiting in the dark to apprehend what was going on. “At any moment a bomb may fall on this very room” she writes. “One, two, three, five, six … the seconds pass. The bomb did not fall. But during those seconds of suspense all thinking stopped. All feeling, save one dull dread, ceased”. 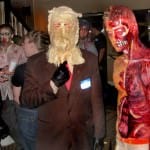 Virginia Wolf concluded that it is for this reason that fear and hate are sterile because these affective states limit the capacity to sense and make
sense. Her essay is of enduring significance because it foregrounds the impact of fear, hate and war on the education of the human sensorium. The fact that Britain, and London specifically, is a bombed landscape is at once ever present within the popular culture and yet at the same time grasping the significance of this history is allusive. Where Virginia Woolf’s essay is such a valuable resource is how it foregrounds the way in which fear damages the imagination and our ability to act.

“Directly that fear passes, the mind reaches out and instinctively revives itself by trying to create” she writes. “Since the room is dark it can create only from memory. It reaches out to the memory of other Augusts – in Bayreuth, listening to Wagner; in Rome, walking over the Campagna; in London. Friends’ voices come back. Scraps of poetry return. Each of those thoughts even in memory, was far more positive, reviving, healing and creative than the dull dread made of fear and hate.”

The sound of the bombs falling haunted Virginia Woolf. She never lived to see a future beyond them, committing suicide at the end of March, 1941. Some blamed her death on her experiences during the air raids. She could not create anew in the future but only within memory’s realm. We need to find ways to repair the harm that hate and fear inflicts upon our ability to see, hear and understand. This is what Woolf refers to, from the darkness of the air-raid shelter, when she argues that these affective states are sterile and unfertile; here there can be no space for growth, development or nurture.