You are here: Home / 3 Ed One / Editorial Edition One 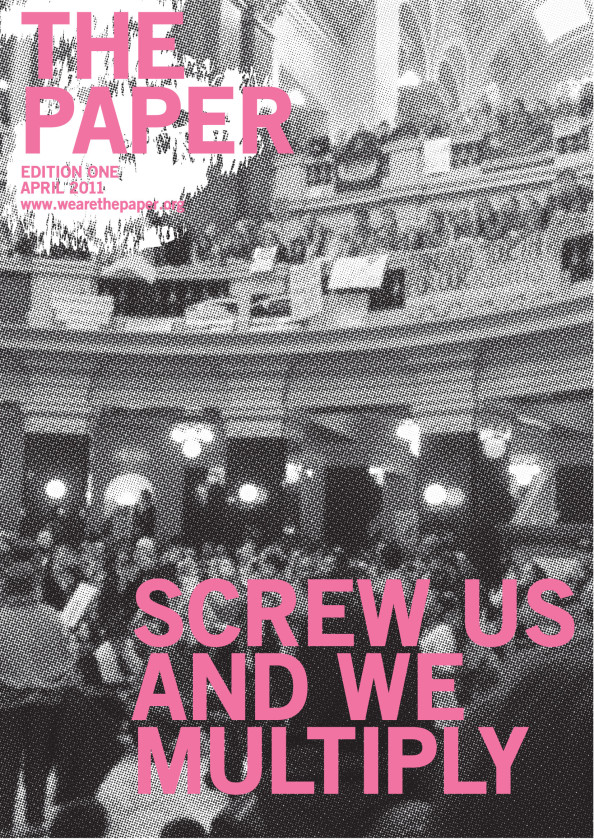 We follow rules, we obey laws, we adhere to social codes. At other moments we disobey the law, we break and bend the rules, we act outside of norms. In order to know when to obey and when to dissent and how to do these things together, we need to talk about our fears and about the things that scare us, the things that keep us apart and paralyse our ability to act. The intention is not to dwell in the comforts of fear, but instead to see what alliances and ideas emerge when we politicise the experience of fear. It is from here that we can confront fear with disobedience.

‘Certain words are like battlegrounds: their meaning, revolutionary or reactionary, is a victory, to be torn from the jaws of struggle’ (The Invisible Committee). Words which used to be ours have been stolen and stripped of their meaning… peace, safety, freedom… to the point where they have come to mean their exact opposite. They are used, along with their twin opposites – extremism, terror, tyranny – like switches to turn on and off our fears: are our universals under threat, is our safety at risk? Some words are to be relinquished, some destroyed, some remain to be reclaimed. Hijacking meanings has been a successful strategy of queer movements the world over; queer, fag, tranny have successfully and joyfully been co-opted.

The production of this editorial edition one(as with the previous ones) has not been smooth. From the struggles in Wisconsin, we found the slogan ‘screw us and we multiply.’ Some of us like the words on the cover, while it made others cringe and argue: what about the rape implications or the reproductive justice irony? We will have no choice but to multiply as abortion rights come under attack. ‘Screw us and we multiply’ is full of latent fears, it reeks of domination and control. Yet on the cover, in the context we find ourselves in, it is being turned against itself, as an expression of power, courage, a ‘we dare you’ in unlikely circumstances. By exploring fear and desire we are reminded that all is performance, and that the act of conscious performance reveals that which has come to be naturalised. Screw us and we multiply can be read as the disobedient re-capturing of meanings acted out as a dangerous play.

Unsurprisingly, the language superimposed on our movements finds resonance with the (neo)-liberal buzzwords used to appease or worry the ‘public’. The movement is strictly ‘anti-cuts’ (we’re fighting for a strictly defined piece of ground), it is composed of (a minority of) ‘students’ (young and idealistic, who will one day learn the meaning of a balanced budget) and, of course, who have been the cause of much ‘violence’. Violence, perhaps with its antonym ‘peaceful’, are the most fraught with hypocrisy of all these trigger- words. With that carefully crafted story, the boundaries of our political imaginaries are fixed, and crossing the frontier will result in punishment. It is made crystal-clear: step out of the authorised march route, break a window, take over the roof of a nexus of power, and we will make you pay. Apparatuses of fear, from kettles to horse charges to the methodical judicial hunting down of ‘dangerous elements’ are there to keep the fear alive and the story straight. Disobedience begins with hijacking that story, the space between here and our future is the battleground.

In the next edition (Edition Two) we examine ‘numbers’ and consider value and measure; what counts, who counts and how we count. Numbers are used to mystify and to distance us from the workings of power. We are interested in value, its measure and understanding how and when (our) values differ.