You are here: Home / 2 Ed Zero / Demonstration and Diversions

Our reporter in Manchester counts the good eggs and the bad

TUC Demonstration Against the Cuts 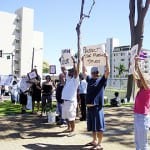 The follow up to the TUC/ Students Against the Cuts demonstration in Manchester on 29 January has been a media led storm about the supposed chanting of ‘Tory Jew’ at Aaron Porter, NUS President. The Daily Mail, that bastion of progressive thought, headlined ‘Student leader faces barrage of anti-Jewish abuse at rally as protesters accuse him of being a Tory’. This was followed by a program on Radio 4 exploring the way that Jew is used as racist epithet amongst the youth of Manchester. This use of racism as a way of avoiding the actual issue at stake is not new, but seems to be part of a wider trend of vilifying those who are resisting the state in any way.

At the Manchester demonstration, eggs were thrown at Porter and the stage for a number of correct reasons. Firstly, the demonstration itself was an insult to the people who turned out as it went from a place where there was no public (Manchester Museum) through an area where all the shops were closed at that time (Wilmslow Road) to a park which at that time no one visits (Platt Fields). A group of protesters rightly heckled Porter for his capitulation during the protests in London. Whilst the chants of ‘You Tory You’ could be misinterpreted (you can make your own mind up from the YouTube video clip:

http://tinyurl.com/5tqavey). Their anger was not misdirected. To their credit, a group of students did then form an impromptu march back up Wilmslow Road to get into the City Centre and were subsequently harassed and kettled by the police.

The second point is that the media coverage of the issue of racism (Sky News and then the BBC) totally eclipsed that on he demonstration and, of course, on the issues of cuts, not only in education, but across the board. Delegitimising struggles or even justifying repressive action – racist Manchester students getting locked up by the police is more palatable than young people defending their right to an education – has become an integral part of propaganda that seeks to make all resistance illegitimate. It seems as if resistance itself is now subject to a kind of set of rules and regulations that are set by the media. When newspapers such as the Daily Mail begin using racism as a way of delegitimising protest it is time to shout louder.