You are here: Home / 2 Ed Zero / Dangerous Alliances: Class and the Student Movement

Recently, I have been asked several times by Italian friends and comrades to talk about the British student movement. I must confess that their questions always made me feel slightly embarrassed. At first, I tried to forget about this uncomfortable feeling, talking about the rise of a new civic participation, which had been lacking in this country since the 1980’s, with the brief exception of the anti- war movement of 2003. Then, in my heart of hearts I acknowledged that in the UK at the moment there is not a ‘movement’ as such, but rather a constellation of small groups and organisations. 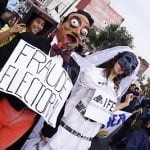 But that feeling of discomfort would not be forgotten so easily. So I tried again, gathering all the hope I had and created a narrative along the lines of ‘this-is-just-the- beginning’ and ‘let’s-give-it-some-time’. Still, the discomfort would not leave me. From an intuition of a problem, it turned into a medical premonition of a disease. Something is rotten within the ‘student movement’, and it is not just the fact that there is no movement as such.

So I took a deep breath, stepped back, and decided to move beyond the facade of slogans and banners that often, and foremost, confound those who carry them. On the other side of political and pseudo-political labels and claims, I found only people. Yet, if I still wanted to satisfy my desire to discover the origin of that feeling, I had to try to understand this multitude using simpler filters than the existential one. As a good Marxist would do, I decided to start with the class filter.

Of course, I was aware of the fact that class today has become an increasingly blurred demarcation of social differences. A further adjustment of the filter was necessary. So I started looking at the people that composed the ‘movement’ under the simple lens of their individual economic positions.

Looking at the socioeconomic composition of the ‘movement’, the differences were stunning. On the one hand we have a proletariat, or even sub-proletariat, mass, represented mostly by youth coming from ethnic minority backgrounds. They are often present at demonstrations where they seem to take the role of physically confronting police brutality, and taking violent pleasure in the odd act of vandalism. Despite their role, and the fact that they are those who will be hit the hardest by the measures of austerity, their involvement in the decision-making process of the ‘movement’ is almost completely absent. The ‘movement’ seems to have forgotten them. You will never have seen them at the general assemblies, held in occupied universities, or in the various meetings promoted by the more ‘cultured’ side of the ’movement’. Once the demonstration is over, they will not look for the other parts of the ‘movement’, and the rest of the ‘movement’ will definitely not look for them. Maybe this has something to do with a more general negative attitude of the left towards the ‘so-called’ lumpenproletariat, which further marginalises the most fragile part the underclasses.

Then we have another mass that perceives itself as middle class. This is, at least numerically, the core of the ‘movement’. However, the middle class itself is on the path to extinction, slowly disappearing like an obsolete language. In fact, for the vast majority of young middle class people, the economic indicators (in terms of family wealth, welfare benefits, current income and potential future income) place them increasingly closer to the dispossessed proletariats than to the wealthier end of their class. Despite this, the common feeling amongst the young middle class is of an innate belonging to the same cultural world of the upper classes (with which, despite their apparent hatred, they believe they share the same cultural values), alongside a deep, almost automatic, feeling of ‘being other’ from their proletariat and sub-proletariat comrades. This feeling of otherness is perfectly exemplified by the general attitude that the middle class (left or right wing alike) has towards the mass of sub-proletariats that they define as chavs.

And finally, we have the upper classes. Most of them are studying at Oxbridge, have a wealthy family background and have a bright future ahead, mainly thanks to their family connections and their university networks. They might be a minority in terms of numbers, but they seem to have elected themselves as ‘the voice of the movement’, holding the most part of the media power within the ‘movement’, which, in our age, means one of the most immediate forms of power. Oxbridge’s domi

nation over all British media (from The Guardian, to the BBC, to The Sun) and over the Parliament is infamous. In Italy we would call this mafia, in the United Kingdom it is normalised under the denomination of ‘ruling elite’, the main difference being that Italian mafia is usually class-neutral, while the British elite system is very much class-based, and of course race-specific. In December 2010 reports were published which showed that 89 per cent of Oxford students and 87.6 per cent of Cambridge students of that year came from the top two socioeconomic groups, and that only one African-Caribbean student movement was admitted to Oxford, none to Cambridge, in the year 2009.

Having looked through the lens and seen what lay behind the simple idea of the ‘movement’, I could not help but ask myself how this was possible. How could activists be so willing to disregard such strong contradictions in the social composition of their ’movement’? How could they, and in particular their middle- class core, decide to accept as comrades people destined soon to occupy positions of power over them, while treating as ‘others’ those who increasingly share with them an underprivileged socioeconomic condition? Why did they never think to invite their natural class enemies to stay away from a movement intended to be in defense of the underclasses?
Maybe this had something to do with some other characteristics of recent and current student movement across Europe. Also to do with a 1968-esque left mythology, according to which students are at the forefront, and the driving force, of any possible social revolution. However, being a student is and always has been a very limited condition, both in terms of length of time and of social accessibility. It is one that does not fit well with the slow and persistent pace required by any serious attempt to create radically progressive social change. Being a student often means falling into an obsession for issues related to the education system, rather than focusing on challenging the general social and economic structures and patterns of inequality that affect the whole of society. This is especially so in the UK, where students seem not to be able, or willing, to distinguish between those who share their imposed place in society from those who determine social impositions altogether.

It was here, at the end of these considerations, that I found again that feeling of embarrassment. It was much closer now to the point of revealing its true name. It was the unpleasant feeling of being swindled.

In the last few months, I have spent a huge amount of energy participating in the British ‘movement’. I was in the somehow privileged position of being both a student movement and a worker at the same time, as well as an anarchist, which allowed me the freedom to move in and out of any specific group or label. I can’t say that I have not enjoyed the wave of activism and enthusiasm that has animated countless demonstrations, meetings and occupations. However, I can’t deny this feeling of being swindled each time I saw the Oxbridge kids on the news with their heated, romanticised accounts of what the ‘student movement’ was. I couldn’t help but feel defrauded of my energy every time I saw young people from Peckham or Croydon being marginalised by a method of organisation that privileged universities as the chosen place of decision-making and debate.

However, it is true this is just the beginning. We should give it more time. Let us hope that this yet-to-come movement will have the clarity of mind to attempt a thorough self- criticism and to redefine its class alliances. Let us hope that the temptations of glamour will give way to a deeper understanding of the patterns of inequality. Let us start working today to expand the organisational base to include those who are more exploited and endangered, and thus more entitled to lead the struggle. Let us move our meetings from central universities to marginal areas of the cities. Let us relocate our attack from the Parliament vs. University dichotomy to the heart of the exploitative system – to banks, offices, factories, churches and the media. And let us forget about second-hand mythologies, and reopen our imagination to a general, radical, even utopian vision of what kind of new society is necessary.