You are here: Home / 1 Ed Minus One / When the torture centre becomes a conference centre 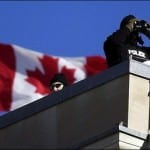 What would you do if you were told that the next inaugural lecture of your University is going to be in a Military School? What if the history of that Military School was closely tied to the murder and disappearance of thousands of people? Translate the same story to the post- dictatorship Chile and you will understand why geographers, particularly in Latin America, are astonished and worried about the decision of the International Geographic Union to hold its regional conference 2011 in the Military School General Bernardo O’Higgins of Santiago de Chile, one of the main operational bases of the bloody Chilean regime between 1973 and 1990.

What is outrageous to geographers is not only the historic symbolism of this place, but most of all how it demonstrates the continuation of strong links between geography and the military. For the regime, geography was a practical tool in psychological and territorial conquest and in the governing of space. Yet since the 1970s radical thinkers, in Chile and elsewhere, have sought to reconfigure geography as a tool for challenging injustices and inequalities, to think space as a political assemblage of power and struggles, as the composition of cultures, voices and claims; as a place in which to realise hope and transformation.

In this tradition, geography should be a instrument for achieving justice and equality. This is why breaking the spatial and material links between this discipline and the military is a crucial demand. Students and academics are asking IGU to postpone or move the conference and scholars to boycott it.
Petition: http://t.co/WyzxNps