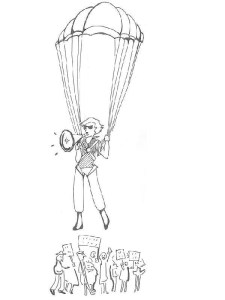 The recent struggles for free education have empowered ‘ordinary’ people to feel as if their actions might count for something. But they have also seen the emergence of a new host of celebrity activists basking in new found media attention.

When we going to be famous? Mainstream UK campaigns and currents could take a leaf out of the playbooks of radical libertarian movements. Clandestinity, no-names, a rotation of public representatives and a culture that respects and honours expansion, inclusion, delegation and skills-sharing as opposed to a marketisation of political personalities and leaders, single issues and compartmentalised goals, differentiate some of the political currents in the UK at present. But the reproduction of capitalist dynamics within our very own scenes – where we think we are being anti-capitalist at every turn and phrase – are evident.

The anti-war and Palestine Solidarity scene, for example, relied upon a rotation of high-profile NGO and established peace campaign organisation directors, MPs and journalists cyclically put out on platforms to become recognisable draws for audiences to consume. My focus here is on the format and focus of these political encounters as the problematic issue, not the achievements or commitment of those concerned. In creating celebrity activists that gain currency on the market of struggle – that is alienation-maintained social peace within the UK – and creating an interface which is personality driven, the agency of those engaged is limited to a form of campaigning which markets political candidates and advertises mass mobilisations.

There is a fine line between writers who use their skills to promote movements and struggles, by name or anonymously or within collectives, and those who seek recognition, status and primacy through their engagement with struggles. I’m not arguing for a moralistic negation of ego, nor condemning the understandable need for recognition. I do not wish to censor individual agency, but am interested rather in how to create communication and movement and trust building. What is the use of writing – a commodity or a rumour? Guided by the market and editorial agendas or freestyle, uncompromising and undoctored? A dominating voice or a voice that gives voice to the voiceless?
Class, privilege, group affiliation and position in an organisational hierarchy can fund the social capital of activist or activist group participation within a movement. Through famous, this acquires further currency and can pay for political mergers (coalitions and joint campaigns), acquisitions (taking over campaigns and other groups) and an increased market share (TV appearances and multi-platform appearances) within a given movement based on the marketability of an individual or campaign as a brand.

It is true that not everyone views spokepersonship as the sale of the self, but in the context of social peace, these market dynamics don’t prepare us well for generalising struggle or for a time when the ante may be upped and social peace implodes. Compared to many majority world movements and also armed political struggles, such as in Lebanon or Palestine, many ‘leaders’ are marked for death, go underground, cells remain clandestine, while above ground activism is so generalised as to become a many-headed hydra that drone-plane assassinations cannot decapitate, or ego-oligarchs cannot co-opt, where there is no need to market or promote. The generalised struggle is intimate, intergenerational, felt on the body and close to death; conditions we do not have here, but which nevertheless have meaning for how struggle can be organised. There are millions that make up movements; unnamed cooks, medics, lawyers, families, funders, trainers, builders, gardeners, farmers, drivers. Struggles when fronted by the same individuals lose their authenticity, their plurality, actually reproduce alienation and mystify the collectivity of change-making.

In abdication of the ‘I’ in the cause of furthering the ‘we’, collectives co- producing theory and action as an alternative to the single voice. The freedom that can come with anonymity, the space for radical movement that can be created in the shade beyond the limelight, actions speaking louder than words, abrupt and open platforms that create space before disappearing and reappearing elsewhere, allow for a political agility that can adapt to moves from authoritarian powers above. The creativity that inspires creativity in others, without copyright, un-privatises creativity. Generalising struggle depends on generalising representation, democratising ‘voice’, and encouraging groups and movements where the many yeses are heard for their substance and direction, rather than status and individualised profit. Look into the mirror. Say it. Look into the blogosphere and say it. Look into the crowds hurling paint and bricks at cops; put on a mask and say it: We’re not going to be famous.