You are here: Home / 1 Ed Minus One / Inside and Outside the Kettle 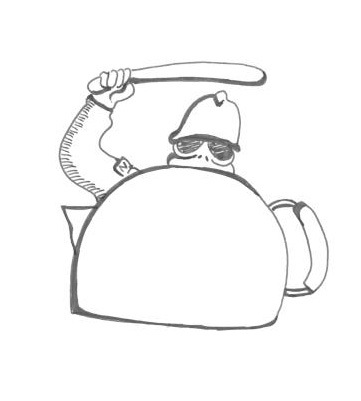 There are many ways to read and feel the kettle. The thing is to climb out of it. Slippery as its walls may be, find a grip, crack a hole, let the rage pour out and the rest of you with it. Make that rage a thing you can examine, learn from. Lest it swallow you, your feelings half chewed. Then take a look around outside, talk with your friends and remember the energy and ideas that carried you into its belly, courtesy of the beast. Get back to talking, planning and organising a movement.

What does the rage do? Well, hopefully it radicalises, brings into sharp focus the lines.
Because it does make clear, yes, even without bullets, that there is risk. If not the violence, loud and open, of baton cracking skull, then intimidation, retribution. After dark a group of us were divided from the rest and marched onto Westminster Bridge. There we were held in a dense, tense mass till they felt we’d got their meaning. In that cage a we is born, reinforced. And a them.
But it can also divide, this rage.

There is the rage of the self-righteous: “we just came here to protest, we’ve done nothing wrong and it makes no sense, it’s not reasonable to keep us here like this”. And within the zone, some were also raging as much against the fire crackering, window smashing youth as at the police. They will never come back. Or not?

The state is not reasonable, it doesn’t give a shit, it will blithely use force where it sees fit.

The language of the kettle is force. Inside it, drops of boiling rage fly through windows, telephone boxes, eventually the Treasury. For most of those swimming in it, it sucks and spits out our energy over long cold hours, making sure we never have the cheek again. It’s boring, frustrating, maddening. And for those outside watching, it is a spectacular, government-run sport. It hands the police control over what is supposed to be a manifestation of popular, not police, will. Big media comply. Vultures, they hover at the edge of the action, their flashes light every small destruction. They choose to ignore the thousand or two late night prisoners on the bridge. In the managed demonstration, we are all guilty, the crime being association.

Only media have passes to move in and out through these borders. Inside, police are invisible, though busy smashing and filming and note-taking. It is a zone controlled, apparently by us. And no matter the caption, the voiceover, the images are clear: here, at the walls of the palace bursts energy, power, and no fear. We are spectacle, the repressed rising. We embody the collective fantasy of smashing all the lies preached in double speak by the Big Society, or for that matter, representative democracy. Of refusing the lonely path of individualised containment, with its exhortations to practise despair, quietism and abstinence – except of course, from consumption. It is a negative, destructive energy, from inside a cage. It is also, at least partly, a collective energy. This is no solitary figure at the gates of the Treasury. It is a group with cheering crowds around them. We are a captive audience it is true. As well as caged performers.

In the kettle feelings are made tangible that most in the world, and many in this country, have long experienced. Now these start to circulate more widely in the university. We may live in a representative system, but it’s not us it’s representing. The “rule of law” may apply to some abstract elite, but not here. For us: chaos, unpredictability, doubt. No right to gather, nor to be heard through the media filter. In our pilgrimages around the perimeter, in pleading, shouting, shoving for an exit, we are confronted with the helmets, boots and batons of an authority that is totally unaccountable, distant. Appeals to rights, to the law or justice have no meaning here. They are part of the liberal arsenal.

Here, in this temporary zone, rules the same logic that operates in the benefits office, or the courts, or the immigration detention centre.

Arbitrary, punitive and opaque. It is the instrument of the neoliberal doctrine that’s already shaken part of the welfare out of the state. In this moment, with the “crises” as shields, what’s left is being either sold off cheap or simply abandoned. The state is being re-shaped. No more will it compensate for unemployment, poverty wages and astronomical rents. As more and more people lose their jobs, as wages drop and prices rise, as benefits are cut and more wealth transferred up, a growing number of us will feel the grip of this logic shaping our daily lives. Neoliberalism severs and fragments, both at the ideological level – we are singular, self-seeking actors – and in its policies which destroy communities, infrastructures, the ability to act together. The kettle is designed to boil and divide us. And to keep the streets clear for shopping and working, not thinking and acting and feeling together. As we did on November 30th, with simultaneous actions in many locations, we’ll find other ways to politicise and be in public space. And as we do this, we need to build our own media, to speak with each other, on our own terms.

And if we look, we’ll also see in the school, the call centre, the college and factory, the rage and energy, the power and powerlessness of the kettle. And the ideology that organises these spaces, right across the university. Not just as victim, but as a site of its articulation and diffusion. The university, school or college, where an already narrow definition of education is fast shrinking, commodified, quantified; only what supports the system is worth learning. As we build our movement, we need to reject this logic in its entirety – refusing to be contained in our project, defending only our privileged patch in the university as it now stands.